I love animals and have watched more nature documentaries than I can count. But one thing that bugs me is that the same handful of cliched animals appear in most of them. You know what I'm talking about: lions hunting wildebeasts, sharks eating seals, bears eating salmon, crocodiles eating zebras. There are so many other interesting animals out there. Here are 25 of them. Like the title says, they're cool in my opinion, and they're relatively obscure, even to animal geeks like me.

This carnivorous bat has a wingspan that can reach up to almost three feet, making it the largest bat in the new world. A stealthy hunter, its prey includes reptiles, small mammals, amphibians, and birds. As you can see below, it is very evil looking. It also has a cool latin name. 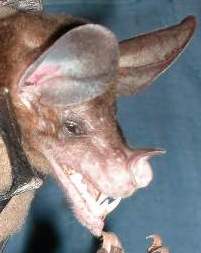 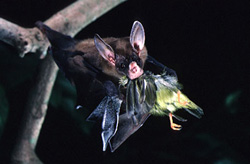 Pistol Shrimp have one larger claw that they can snap together with such force that it creates a pressure wave strong enough to kill nearby fish.

The only animal on this list that gets a mention for being pretty, the Guianan Cock-of-the-rock is notable for the male's bright orange plumage and dramatic half-moon shaped head crest, which sometimes totally obscures its beak and lends it an odd appearance.

Hailing from Madagascar, the Fossa is basically a large, agile, muscular tree mongoose. It's the largest mammalian predator on the island. It hunts lemurs. 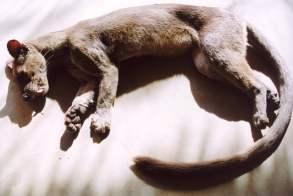 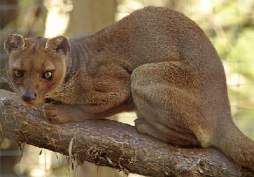 Its latin name literally translates as 'vampire squid from hell'. Although its creepy appearance is frankly enough to land it on this list, it is interesting in many other ways. Definately check out the video (it appears after a brief intro) or feel free to do more research. 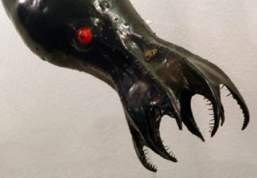 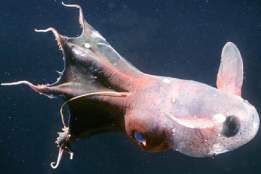 Not quite worms, not quite arthropods, Onychophora are in a category of their own. Velvet worms are predatory and several species can immobilize their prey by shooting a glue-like substance out of glands in their heads. 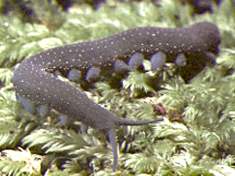 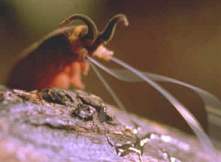 The young of this unique swamp-dwelling tropical bird have two claws on each wing they can use to clamber around in the branches. They lose the claws as adults, but remain strange in other ways. Look them up for more info.

Long extensions of three of this deep sea fish's fins allow it to stand on the ocean bottom where it waits for small crustaceans to drift towards it.

A family of small, deceptively predatory, birds known for impaling their prey on thorns (see below). Victims include insects, small birds, and small mammals. Skewering its meals helps the Shrike eat them more easily and allows it to create a 'larder' of food to return to at a later time. 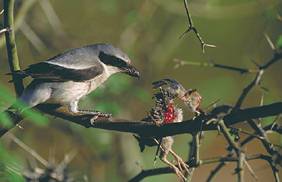 This animal is a member of the canine family, but comprises a one-off species. Obviously it gets its name from its raccoon-like appearance. It's native to East Asia. In Japan it's known as the Tanuki and has a longstanding reputation for being very tricky indeed. 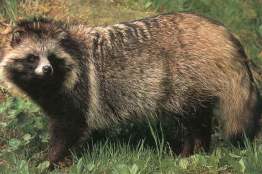 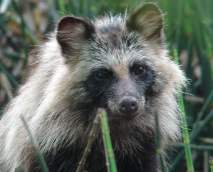 It's really just a salamander, but it's the largest in the world and can grow up to around five feet in length. And that makes it cool. 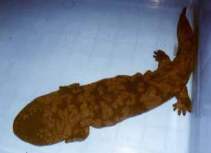 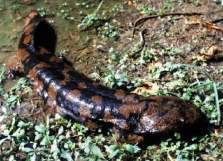 Also known as Embiids, members of this obscure insect group are able to spin silk from structures on their front legs. The silk is used to weave tunnels and galleries on the ground in which they live. 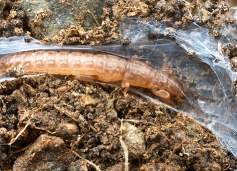 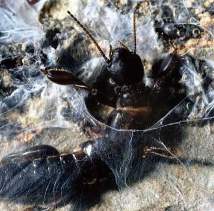 Considered a parasite, this small deep sea shark's jaws allow it to remove circular plugs of flesh from its victims (check out the picture). It also has a pale blue-green bioluminescent belly which, when viewed from below, makes it blend into to the ocean surface above. 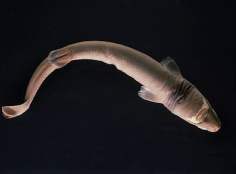 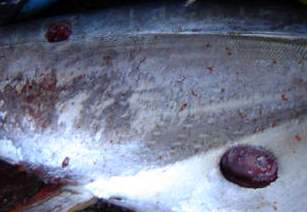 The world's four species of handfish have highly modified pectoral fins that they use to walk along the sea floor.

Although they resemble spiders, they're really in their own seperate category of arachnids. Their front 'legs' are elongated pedipalps which end in adhesive organs. Their jaws are like two small pairs of pinchers and are used to chew up their prey. Although quite scary looking, their size and deadliness are often exaggerated.

A medium-sized African wildcat known for its long legs and big ears. It lives in grassy areas and mainly hunts rodents. I'm not sure why you don't hear about them more often. 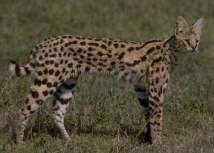 By changing its texture, arm positioning, and movement, the mimic octopus is able to imitate around seventeen other animals, including lionfish, sea snakes, flatfish, and brittle stars. Wow, what more can I say?

This large mountain vulture subsists mainly on bone marrow, which it obtains by dropping bones from the air onto rocks. It also eats rotting flesh, small animals, and pieces of actual bone (which are digested by its strong stomach acid). Included under 'small animals' are tortoises, which succumb to its bone breaking tactics. 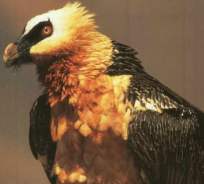 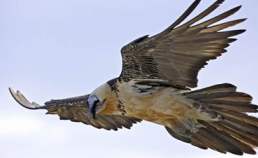 Copepods are common little crustaceans that are found in the ocean and most freshwater habitats. I don't know the exact species, but one type of deep sea copepod is bioluminescent and can blink on and off like a Christmas light. More amazingly, they can also fire time-delayed chemical 'light bombs' to throw off predators that try to zero in on their flashes.

A small group of sneaky jumping spiders that prey on other web-building spiders by plucking their webs in such a way that it mimics a trapped insect. Through skillful plucking, the unwitting victim is manipulated within striking distance. Somehow the Portia Spiders know which variations of web signals to use to draw different prey spiders into their grasp. They're camouflaged to resemble pieces of leaf litter. And they're even more interesting than the highlights I've covered here, do some research to find out more. 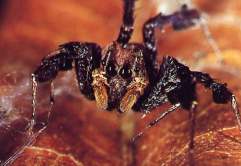 Hagfish are worm-like, extremely primitive 'fish' (and even that is up for debate). They lack a proper jaw and instead feed using a pair extrudable toothy plates that they use to rasp away pieces of meat from the living or dead flesh they feast upon. Their other distinguishing feature is an ability to secrete a fibrous slime that turns into large quantities of thick mucous when it comes into contact with water. They clean the mucous off themselves by tying into a knot and passing the loop along their body.

Part of a larger group of ugly, well-hidden, bottom-dwelling fish with venomous spines, the Demon Stingerfish has a particularly creepy feature: The 'fingers' of its front fins are partially modified to give it insect-like 'legs' that is uses to crawl along the ocean floor. 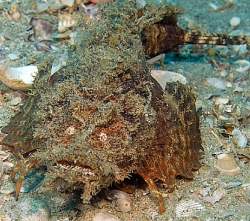 When insects touch certain sensitive hairs on their backs, these camouflaged caterpillars quickly snap around and seize their prey with their large, hooked forelegs. It's believed this adaptation fills a niche normally occupied by insects like the preying mantis, but left open in isolated Hawaii.

The largest member of the weasel family, the Giant Otter can reach lengths of up to six feet. It swims the rivers of the Amazon and hunts all kinds of small, meaty animals there. 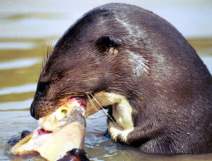 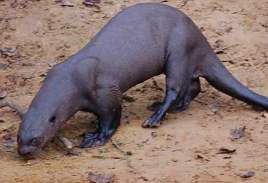 You've probably heard of the Giant Squid before, but the Colossal Squid is even bigger. The largest specimen ever recorded was 33-feet long and weighed just over one thousand pounds. The Colossal Squid's tentacles are lined with dozens of sharp, independently swiveling hooks. It has the largest eyes of any animal. 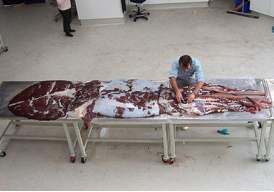 I'm sure there's an error or two in my descriptions, apologies for that.


Copyright 2018, www.succeedsocially.com. Photos copyrighted by their original photographers. If you recognize one of your photos and want me to take it down please drop me a line at 'succeedsocially AT yahoo.com' and I'll happily do so.

I made this article out of my own interest. It has nothing whatsoever to do with my main site, which is a guide to social skills. Check it here if you want to: